A prominent member of our Historical Society asked me when the Chemung River was named and by whom. The search for that answer took me through history books, early newspapers, and maps. The facts seem to be that the Delaware Indians moved into this area in 1756, found a mammoth tusk (now located at the Chemung Valley History Museum), and named the area and river Chemung a Delaware meaning "Horn in the Water." It is recorded that this tusk was found near the area where the Riverside Cemetery is in the Town of Chemung. The Delaware Indians built a village just a stone's throw from the area that the mammoth tusk was found, and called it Chemung. 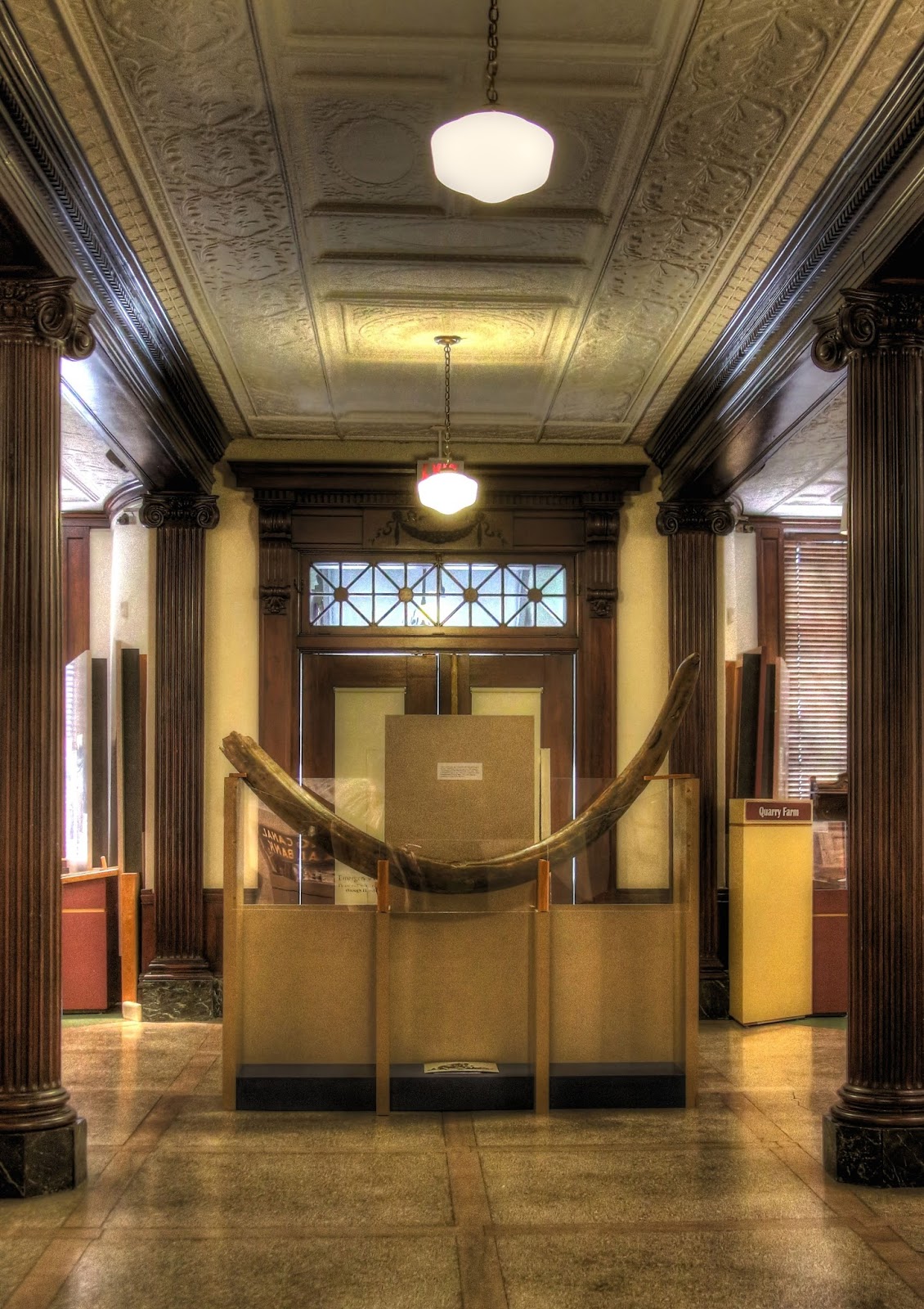 The village contained fifty or sixty houses, built of logs and frames, and situated on the banks of the Chemung branch of the Susquehanna River. It was near this village on August 13, 1779, that the first clash between the Native Americans and Gen. John Sullivan's troops, led by Lieut.-Col. Adam Hubley, began, and it's well-recorded in the Hubley journals. The name, Tioga, was used in journals of Officers, later historians, and mapmakers since we became a part of Tioga County with a survey in 1788 by New York State. In 1836, a Legislative Act separated the two counties, and we became Chemung, with the river reverting to the name the Indians gave to it. 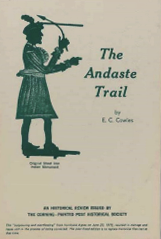 A Map of the History of New York State | 1768-1780
Map of Sullivan's Expedition | 1779
The Andaste Trail to Painted Post by Ellsworth C. Cowles
Map No. 4 of the Surveys Made by Lieut. Benjamin Lodge | 1779
Journals of the Military by Frederick Cook, Sec. of State | 1887
Journal of Lieut. Col. Adam Hubley

The river is born where the Tioga and the Cohocton come together above Corning, NY. It flows southeast to a post-glacial pass just below Big Flats and then through an ice-gouged valley towards Elmira. The scarped hills above Fitch's Bridge are believed to be glacier-formed. From there, it flows through Elmira to Fort Reed and then southeast to Tioga Point, where it joins the Susquehanna River below Athens, PA.

Nine-tenths of Chemung County is drained by the Chemung River into the Susquehanna Basin and then to the Chesapeake Bay. The remaining one-tenth is taken by Catherine Creek, which drains north to Seneca Lake, to Lake Ontario, and finally, to the St. Lawrence River.

The Chemung County Master Plan of 1967

The Chemung County Master Plan of 1967 used the Chemung River in a fresh water park plan with an inflatable dam near the Dunn field area. This created a slack water pool, which gave Chemung County all the fresh water they later incorporated into the Park Station County Park. People have always used the river for recreation. Some would build houseboats and float down the Chemung and Susquehanna rivers as far as time and means would allow. Winter ice-skating above the dam and the racing of horses below the Lake St. bridge on the river ice was in vogue before the turn of the 20th century. Sculling, canoeing, and boating were enjoyed by the general public, and were done both above and below the dam.

The Elmira Boat Club was formed around the turn of the 20th century, too. They maintained a boathouse at the foot of Columbia St. They kept two single racing shells, a double shell, and two sail boats. Many boating trips were made by the Club, some all the way to the Chesapeake Bay. Towns at which they stopped would greet them as distinguished visitors and allow them to pitch their tents on the village greens. Regattas (boat races) against neighboring cities were popular. In 1888, a small steam-powered sternwheeler named Bertha Taylor, owned by I. Rood Taylor, carried passengers from Columbia Street to Rorick's Glen. The fare was 25 cents. 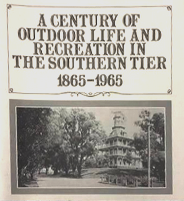 Many young men joined all-male Cottage Clubs along the river. There, they could dine, play cards, go fishing, or take a boat trip. At the Chemung County Historical Society, the September 1963 Journal has a excellent article by Edward L. Van Dyke of these river cottages, and an exhibition catalogue by Michelle L. Cotton, A Century Of Outdoor Life And Recreation in The Southern Tier 1865-1965, is another publication that cries to be read. The all-male dining socials still go on in Rod and Gun clubs today.

Like the Native Americans, the early settlers settled along the river and creek banks. They cleared the land and used the river as their highway and as power for their mills. Lumbering from 1798 through the early 1840s was a major industry, and the river was alive with log rafts and arks.

The Baldwin flouring mill on West Water Street was run by water power generated at the dam, built by Isaac Baldwin. Today there are still remnants of the Junction Canal Dam; piles are still visible at the Jenkins and the Katy-Did Dams. The Junction Canal Dam, called Johnny Cake, also furnished power for a mill at Wilawana, PA. The Athens Dam base stones can be seen when the river is clear. 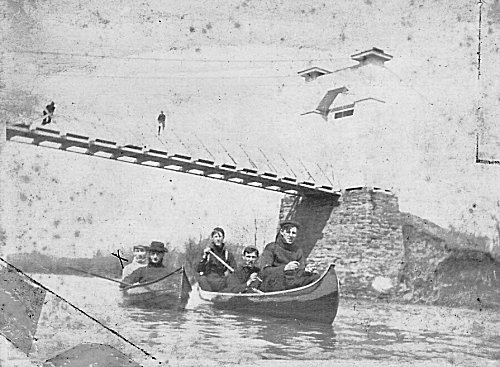 In the early days there were two ways to get across the river. One was by fording, crossing at low water, but there were only a few places this could be done. Recorded fords were Rowland's Eddy above the Mountain House and Harrington's Ford a mile up the river from Lowman. Before bridges were built, our first settlers relied on ferries that were located along the river banks. Some ferry locations are shown on our oldest maps. One historic account tells of a ferry in the Town of Chemung and the house that the ferryman lived in, which has been restored. Another was just above the Baldwin Island in the town of Ashland, and of course the Kline Ferry where Madison Ave bridge is today. Travelers might have been expected to pay as much as a shilling for a two horse team, sixpence for a one horse rig, with many payments being paid in barley, whiskey, corn, or butter.

There are recordings of people drowning in attempting to get across by fording, and each generation has its story of tragic drownings as the river is used for swimming, boating, fishing, and ice skating. A number of tragedies are connected with well-known dangerous places, and these picked up names such as the Green Hole, below the Mill Dam, and the Crook Hole at Katy-Did, And the Big Hole near Brands Tobacco Warehouse. A calamitous example was on June 21, 1910, when two 15-year-old teenagers drowned in the middle of the Baldwin Dam, witnessed by several people. In 1843, a 880-word poem, The Ballad of Martha Decker, was inspired by the the tragedy of a 13-year-old girl who drowned while crossing the river on a horse.

In the year 1903, an escaped seal from a Cortland Trout Park visited Elmira and was seen just below the Baldwin Dam near the foot of College Avenue. The dam turned it back toward Madison and Lake Street Bridges. The bridges and riverbanks were soon crowded with people. Every available boat was brought into use to try and capture the animal and to claim a reportedly large reward, but the seal escaped.

On Saturday morning, July 25, 1903, the seal was seen was seen in the vicinity of Rock Spring Brewery by three men bent on its capture. The area was in shallow water, and they almost had it in their boat when it made a lunge at one of them. The seal was clubbed and died. It was placed on exhibition in the window of Berner's cafe on East Water Street. It was 61 inches long and 15 inches thick weighing just 150 pounds. So ended a sad, but true story.

In the river are many islands, some quite extensive that stand like living emeralds to children. In my youth, these all had to be explored with friends. We spent many days outside fishing, boating, swimming, and just exploring. What better way to spend a hot summer day than drifting down the river in a rowboat? We found islands that were just grassy, some that had a good stand of timber. Some were used as pastures and a few were cultivated. All were uninhabitable because of the high water. The river was our playground, and in the summer with our bikes to get us to the bank, we swam in it from the Dunn Field up to Fitch's Bridge where the last water toboggan would allow us to skid half way across the river. Fitch's Bridge was our diving tower.

I have found the names Wschummo, Shimango, Skeemonk, Shamunk. These are variations of a Delaware Indian word meaning "the big horn", like the one found in the riverbed. Other recorded tusk finds:

Commercially, the river was used to catch fish to peddle, and there were several eel traps. It has always been a source for fur trappers. Until electric refrigeration, the harvest of ice was a large industry which kept many men employed.

The City of Elmira's tax base was developed from the River front lots in its earliest days. The Village of Elmira would lease the property along the river, and the leases would construct buildings for their use. Eventually, they would buy the property and pay taxes on it. Down through the years, as Elmira downtown developed, property was sold, transferred, and sublet. The need for additional space developed additions to the back end of these buildings. Cantilever unpainted overhanging porches gave an unsightly appearance from the south side when you approached from the bridges. From the 1920s to the 1950s, the river was used as a garbage dump by the tenants of the buildings from College Ave East to Madison Ave. It was only cleaned when a storm raised the river level and washed the debris away. The concrete levee and urban renewal finally cleaned it up. Today's fisherman know that certain areas still have illegal dumping, but they also say fish are making a comeback.

On January 8, 2001, the Congregation of the Holy Trinity Orthodox Christian Church of Elmira Heights participated in a ceremony that they called theophany to bless the waters of the Chemung River. "The ceremony reflects the importance of water to all life," said the Reverend Jason Kappanadze, their pastor. I think the Native Americans who first used the river for their transportation would agree and wonder why we waited so long to have this blessing.