The Chemung River in downtown Elmira hosts a colony of ring-billed gulls. The gulls live on an island of gravel—impressive, since they usually live on rooftops or islands in lakes that are not threatened by changes in the water level. The colony can be observed from Riverfront Park on Water Street. 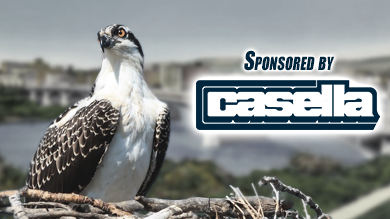 Check out our nesting osprey! Marty Strong and his Horseheads class spearheaded the construction of an osprey nesting pole between the Main Street and Walnut Street bridges in Elmira in 2005. After an eight year wait, an osprey pair nested on the pole and have successfully fledged for several years. The osprey hunt fish, diving from fifty feet in the air to plunge into the river and grab fish with their talons. The bird has a fifty inch wing span and dark brown, white, and black plumage.

Our new live feed from the Osprey Nesting Pole on Clinton Island in Downtown Elmira, sponsored by Casella, is live! To view the osprey nest in real time, click here and use "guest" as your username and password!

Ospreys at Chemung River in Elmira 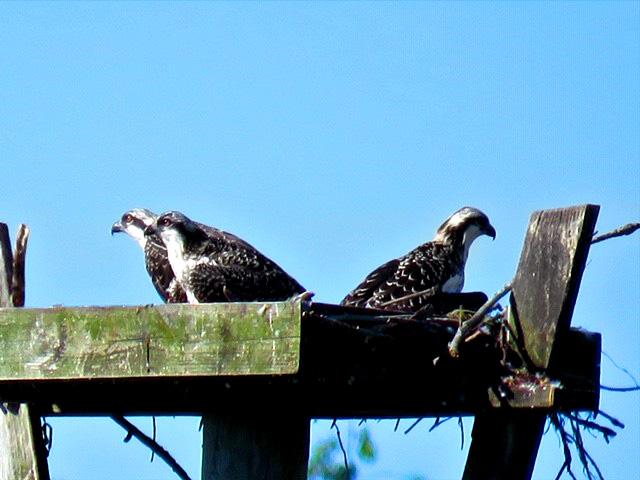 Special thanks to local birder, Michele Rosenbaum, for the osprey pictures that accompany this article!

The mom and dad osprey are back on their downtown Elmira Chemung River nesting platform and ready to spend another spring and summer in New York to add to their every-growing family. Mom and dad arrived at the nesting pole, on Clinton Island between the Main and Walnut street bridges, on April 3, 2020. You can view them on the Chemung River Friends Osprey Cam above.

The nesting pole and platform were erected in 2005 by three fifth-grade classes from Horseheads Intermediate School, led by science teacher Marty Strong of Elmira. The nesting platform remained vacant until 2015 when this pair of ospreys began nesting there and returning each year. The students named the birds Gadabout and Gaddis, after a 1960 TV show about a fisherman named Gadabout Gaddis who flew around the world in his private plane to fish.

The nesting couple return each spring from South America, where they spend the winter, after migrating there in the fall, a trip of more than 2,500 miles.

The Elmira-born and year-old ospreys also migrate to South America. They spend two to three years there before returning to the Chemung River. Unfortunately, only about 20 percent of the young birds safely complete the round-trip. Many are killed by hurricanes, pollution, and people. In 2019, some of the Elmira-born chicks returned to nest on an osprey nesting pole near Dunn Field and on a high-tension electric wire tower near Corning High School. Ospreys have not yet been sighted at those nesting sites.

The ospreys, or fish hawks, live on a diet of fish that they catch by diving from the air into the river to snatch dinner and bring it to the nest. You can see this amazing display of angling skill on the Osprey cam or by going to the river with a pair of binoculars and watching the show live. 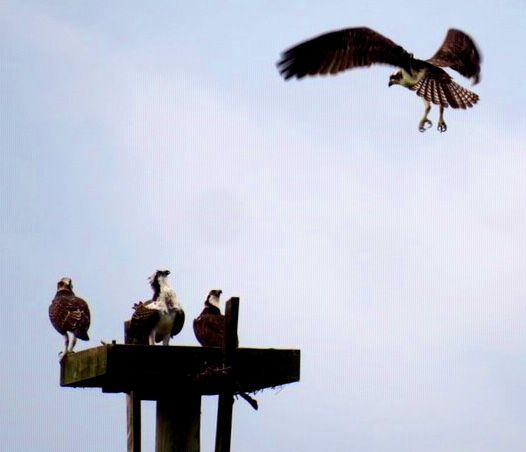 You may witness dad perform an aerial "sky-dance," sometimes called "fish-flight." With dangling legs, often clasping a fish or nesting material in his talons, dad alternates periods of hovering with slow, shallow swoops as high as 600 feet or more above the nest site. Sustaining this display for 10 minutes or more, he utters repeated high-pitched screaming calls while gradually descending in an undulating fashion to the nest. If mom accepts the fish, they will mate and raise a family. Dad’s display shows mom that he can fish, repair the nest, fly, and care for the family.

Captured fish usually measure about six to 13 inches in length and weigh one-third to two-thirds of a pound. The largest catch on record weighed about 2.5 pounds.
By the end of April, mom will lay two or three eggs at one- to three-day intervals and incubate them for 37 days per egg. The chicks hatch a few days apart. Good thing, because all they do is eat until they are old enough to fly and catch their own fish. Dad will spend most of his daylight hours catching fish for his growing and hungry brood.

How an Osprey Catches Fish

The fish hawk flies slowly, often in a circle, up to 130 feet above the water, searching for fish. Sometimes it hovers to take aim, swoops down, thrusts its legs and talons forward in line with its head – like sighting prey down the barrel of a rifle. The bird hits the water with open talons that snap shut automatically on the fish (in two-hundredths of a second).

The bird lifts itself and the fish out of the water, shakes the water from its feathers (like a dog shaking off bathwater), aligns the fish with its body (like a torpedo for less air resistance) and flies to a perch to eat the fish or to the nest to feed the young. During breeding season, the male osprey spends about 25% of his time fishing to feed himself and his family.

Nesting osprey is a sign that our river environment is relatively clean and healthy. Osprey are at the top of the food chain. That means all the other creatures in the chain below the ospreys are healthy and abundant. That abundance comes from a clean, safe, and healthy environment.

What are all these bugs and shells? Check out this guide to aquatic invertebrates.